That Mac shop offered me the same kind of RAM for about 45-50 €. Hmm, .... No thanks. I went to my room and picked some money from bankomat. I returned to the computer shop and the seller offered me (except my umbrella - for free of course) one module for 24 €. It has not been tested yet. I have bought it and put in my iMac - and nothing happened. Bad, but I had to go to the school. After my lecture I went to the shop again and changed the module for another. This time it was Kingston for 27 €. But I didn't have to pay at that time. I inserted the RAM as before and it worked! 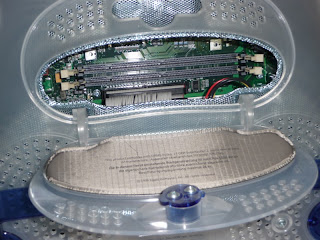 The RAM slots in the rear of iMac
I have 512 + 64 = 576 MB RAM now. For Mac OS 9 it should be enough. I have also turned the virtual memory off. The increase of speed is evident, especially when I use more applications at once. Now I can use Mac OS 9 with more pleasure or with pleasure.
(Of course I went to that shop once again on the next day and paid the rest :-))

I have found iTunes 2 for OS 9 and installed it. It runs quite nicely and finally I can stream radio.

I have QuickTime 5 but what about Windows Media Payer 7? I don't know if I will have to use it but for every case.

Acrobat Reader 5 is also a good choice. It seems a bit faster than version 4.

This iMac is not a gaming platform for sure, but I wanted to test and see the abilities of graphic card.

As a first game I tried Diablo II demo. I have adjusted the resolution and the video renderer as RAVE because of "3D" environment. Game runs smoothly at 800x600 resolution (millions of colors), it's quite playable.

Second game was Quake III demo. It is one of my favourite games and I was wondering about how will it run. I tried many settings and the best in my case is 640x480, 32 bit (16 bit is even faster but I don't like it), texture and geometric detail low. It can seem very ugly, but when you play it is OK on iMac display. Of course it is possible to have better resolution and image quality but I like Quake to run as fast as possible.

The third game I want to mention is Warcraft III demo. This game ran at 640x480 with 16 bit color depth. It was playable but not for me. Actually my iMac does not even fullfil minimum hardware requirements.